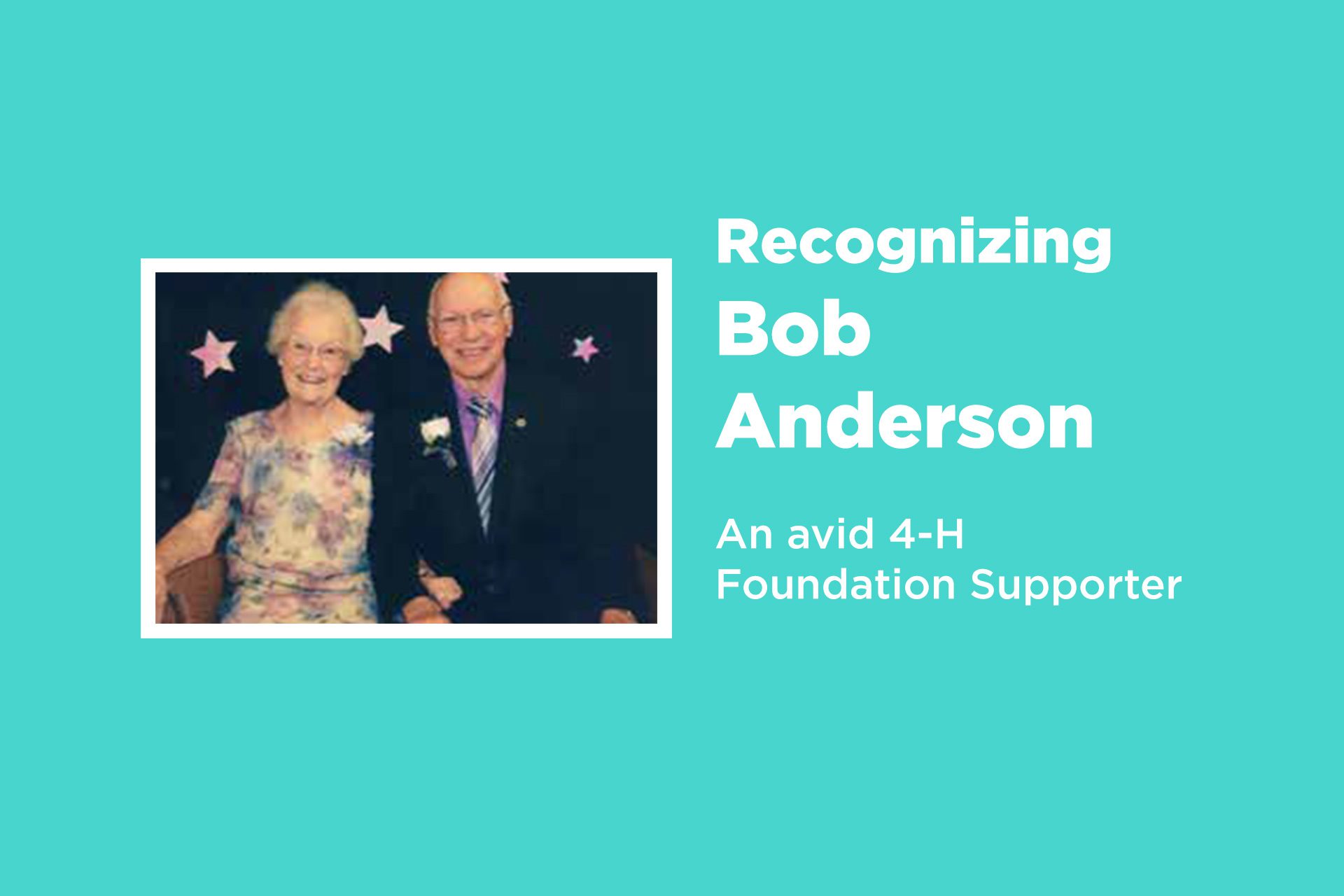 Robert Anderson and his wife Maurine have been avid supporters of 4‑H for nearly 30 years. Bob grew up on a dairy farm outside of West Lafayette while Maurine grew up in town. Bob and Maurine met in a church youth group as teenagers. Bob was a 10 year 4‑H member in Tippecanoe County, and he fondly remembers getting his first 4‑H hog from Linwood Farms at Purdue. Bob continued to work on the family dairy farm all the way through college while studying at Purdue.

After college, Bob joined the Army and was stationed for two years in Missouri, where he interviewed recruits for their job placement. Dave Pfendler at Purdue helped Bob get his first job after the Army as the County Extension Educator in Marion County – which at the time had more 4‑H Club kids than any other county in the country. Bob held this position from 1956 to 1959.

Bob moved from Extension to Equitable Life Insurance of New York, where he worked for forty-two years. While working in the insurance business, Bob and Maurine had three daughters, Sara, Gretchen, and Charlotte, who were all 10 year 4‑H members. During this time, they moved from Indianapolis to Noblesville when Bob and Maurine purchased 120 acres of farm land in Hamilton County.

Bob and Maurine were able to farm on the side throughout their lives, even as Bob was very active in the insurance industry. The Anderson family grew corn, soybeans, and wheat, as well as raising Angus cattle. As the Noblesville area started to boom, a developer purchased much of the family’s farm land which Bob says was a “great investment”. Bob and Maurine then started buying and selling farms – a total of 9 different farms.

Bob and Maurine chose to give back to the charities that helped them when they were younger and to the organization that helped them to become who they are now and helped them in their careers. The Anderson’s’ goal has been to focus on a few charities while they are still around to see their investments helping others. Bob chose to support Indiana 4‑H due to its fundamental influence on his life and career.

4‑H provided him the opportunities to speak in front of other people, work with other youth in counties and 4‑H clubs across the state, and hold leadership positions. Bob was the President of his Junior Leader Council and this provided his first opportunity to run a meeting. Bob’s experiences in 4‑H helped him not only in college, but also in the military and throughout his life insurance career.

Some of Bob’s favorite 4‑H memories include sleeping in the barn with his 4‑H animals at the Tippecanoe County fairgrounds, staying up all night and having water fights.

Without 4‑H in his life, Bob says,“I wouldn’t have had any experience in public speaking. Through 4‑H, I was able to meet a lot of people throughout my county which helped me a lot in life at that time. Without 4‑H, I wouldn’t have any of those lifelong friendships.”

“Life has been really good to us and we try to give it back.”