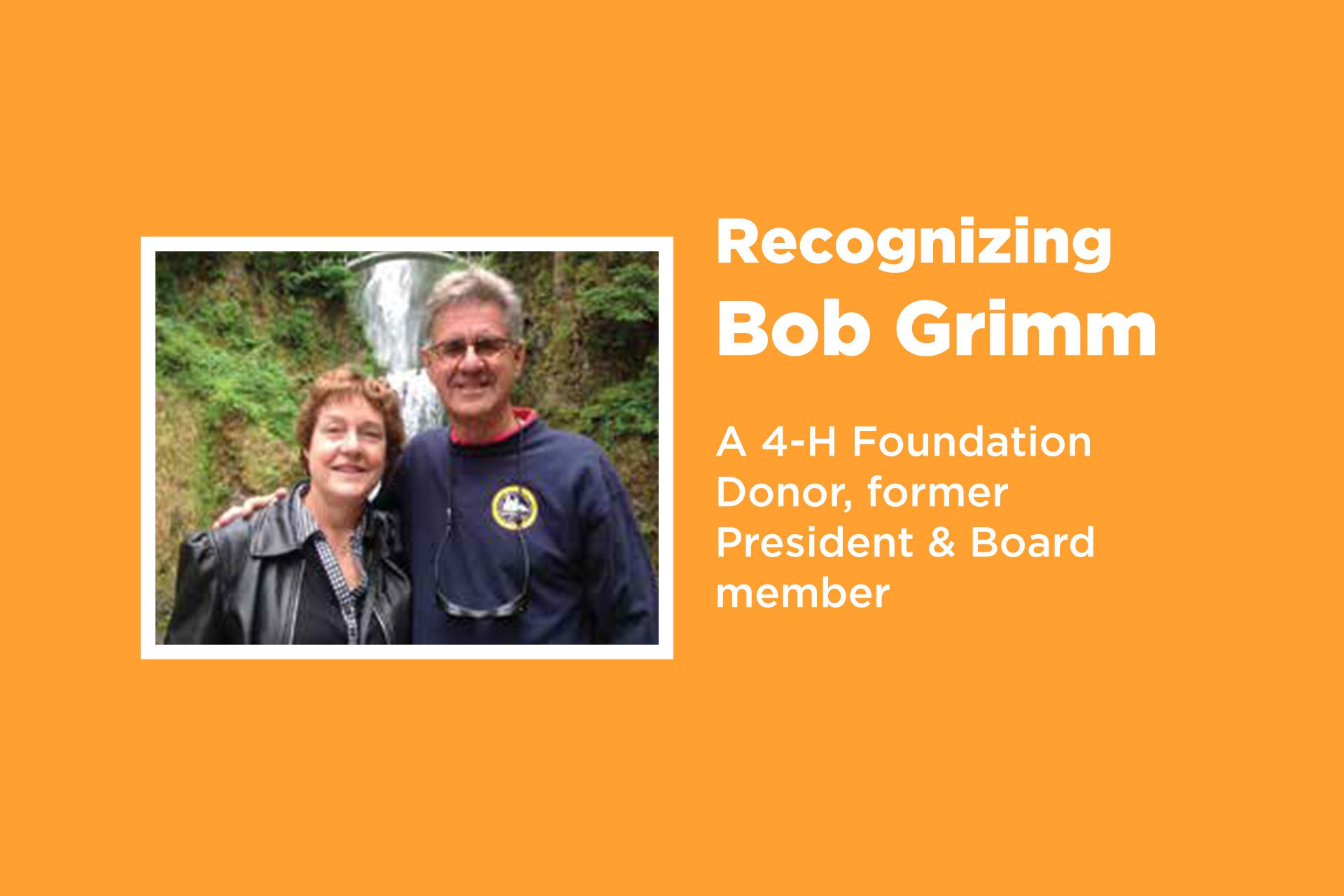 Ask Bob Grimm why he chooses to support the Indiana 4‑H Foundation as a donor, and he is quick to answer, “The experiences I had in 4‑H profoundly changed my life.”

Those experiences included the opportunity to develop his leadership style, the chance to live abroad, and even meeting his wife, Cindy. For those reasons and many more, Bob has continually chosen to support the 4‑H program and current 4‑H youth through the Indiana 4‑H Foundation.

“You can’t pay back, but you can pay it forward to the next generation,” said Bob. “When I think of all of the personal development that I received as a young person through 4‑H, I want to make sure that others have those same opportunities.”

Bob credits Junior Leader camp, state leadership camps, and National Leadership Conference with helping him learn leadership skills and developing his leadership style. Those experiences gave him the confidence and the skills to pursue a career in business leadership, specializing in human resources.

“4‑H hangs its hat on character, and leadership, and service,” said Bob. “When I look back I can see how 4‑H cultivated in me the values of altruism, service, and coaching others and made those things part of my leadership style.”

A 1977 International 4‑H Youth Exchange trip to the Netherlands gave Bob a bigger view of the world and introduced him to his future wife.

“That was a terrific exchange that was focused on people-to-people,” said Bob. “That experience changed the way I looked at my country and developed my appreciation for other cultures. We have been fortunate to visit some of our host families and people visit us here in the States as well, thanks to IFYE.”

As a way of paying it forward, Bob and Cindy gave a lead gift to the International 4‑H Endowment, paving the way for
others to help fund the endowment, which supported 4‑Hers who travelled to Poland and Japan.

Bob served as President of the Indiana 4‑H Foundation Board from 2009 to 2011 and served on the board for nine years total. While he was on the board, he led by example, working with Robert “Doc” Abel to establish an operating endowment for the Foundation in Doc’s name.

“It was a great honor to establish that endowment with Doc while he was still alive,” said Bob. “It was one of the highlights of my time on the board.”

While on the board, Bob also led the charge to survey other 4‑H Foundations across the country and found that, compared to other states and given the tradition of 4‑H in Indiana, the Foundation’s assets were very low. Under his leadership, the board established the Legacy Society to encourage 4‑H supporters to remember the Foundation with a gift in their wills. Bob again led by example, designating a percentage of his estate to the Foundation.

“The Legacy Society and tremendous staff and board efforts around the 50th anniversary of the Foundation helped quadruple the Foundation’s assets over two years,” said Bob.

“My life was forever changed by 4‑H,” said Bob.

Thanks to his generosity and leadership in establishing two endowments and the Legacy Society, Bob has helped ensure that 4‑H in Indiana will change others’ lives for years to come.